Ruth N. Holroyd was the creator of this wonderful mural. The inspiration for the design of the Ecclesiastical Mural was a series of Lenten bulletins created by an unknown artist and printed in 1974. Parts of the original design were deleted, rearranged, and redrawn to full size. They were then traced with colored inks on sections of pellon to be laid on top of the work for guidance in the weaving. It was hand-woven in a special inlay technique whereby the colors were individually placed on the surface of the hanging, with none of the design showing on the reverse side, and held onto the woven background by fine, nearly-invisible warp threads.

The colored design threads are Paternayan needlepoint (triple-ply) wool yarn, unplied to be used singly. The tie-down threads are fine white and black cotton. Each element of the design is outlined by the dark background linen to create the stained glass window effect. It was woven “sidewise” on a 40” wide, 12-shaft loom, starting on the left with the angel.

The Mural was many years in the making. A trial sample measuring 12 x 22 inches was woven in 1976 with colors on hand but the search for the right size wool in the correct colors delayed the full scale weaving for several years. The range of colors was at last discovered and the weaving of the full-size Mural was started in the fall of 1993 and was completed in 1998. The weaving was unusually slow because of the intricate handwork, progressing about one inch per day. A great deal of hand finishing on the back of the fabric was done slowly over the next few years. Sonja Wahl did the finishing in 2005.

It was a pleasure to weave, fulfilling a dream to be shared and enjoyed with others. It remains untitled because
everyone who has seen it seems to have a personal response to it. It was thought best to leave it that way. 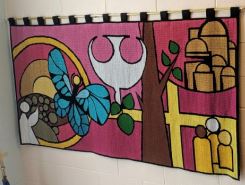 Ruth N. Holroyd was a weaving instructor from 1963 to 2011. She taught privately in her home studio, locally at The Memorial Art Gallery Creative Workshop and the Weaving Studio at Chautauqua Institution. She also taught nationally at Regional and National Weaving Conferences and Weaver’s Guilds Workshops throughout the country and internationally, including a 5-week teaching tour in South Africa. She has published a three-volum

e set of books based upon two historical manuscript weaving pattern books dated 1790 and 1834. She was technical adviser to the Curator of the Handweaving Museum in Clayton, a member of the Collection Committee there and is preparing her own lifelong teaching collections for transfer to the Museum.

Ruth retired from weaving in 2011 and has 4 sons, 13 grandchildren and 15 great-grandchildren. In 2011, Ruth moved in with her son Hilding and his wife, Judi, outside of St. Louis, MO. She moved backto Webster in 2016 and lives with her son Graham and his wife, Karen. Her husband, Edmond W. Holroyd, Jr. died on All Saints Day, November 1, 1983.